The Soundtrack of Life 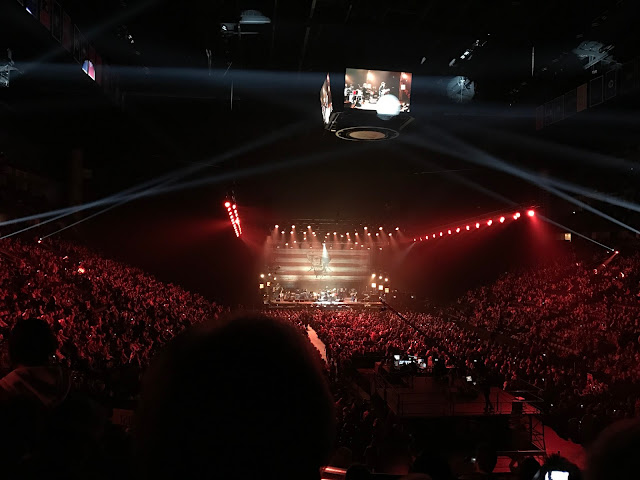 A couple of weeks ago we went to the Merle Haggard tribute concert with enough other people to pack Bridgestone Arena. Here is the setlist from the night:

It was mindblowing to see all these artist perform these amazing songs all in one night. It was a real "pinch me I must be dreaming" night. It was just like being present to witness that dash between the birth and death of Merle Haggard. As I sat there watching people perform, who have been performing in Nashville all of my life, so many things ran through my mind.

I thought about how powerful our pain and sorrows are in that they are truly the stuff songs are made of. It's how writers share their emotions with us and it is how we feel our own emotions less alone because others have set it all to music in a way that helps us get through whatever life throws at us. The emotions of both the writer, the singer and musicians and also that of those listening are like the threads of the fabric that makes up what a life is.

This show elicited so much emotion that there was almost a fight in our section between two women who wanted to soak up every second of it but who preferred to do it in different ways that did not jibe. One lady was standing, being very loud but completely enjoying the show with no regard to anyone else around her. The other lady (seated) took notice and was deeply offended that the standing lady had caused the people behind her to move and that her loudness was drowning out the other sounds in the area we were in. The seated lady just wanted to hear every sound from the stage without disruption. I kind of see both points. The standing lady was loud but she was at a concert. The seated lady stood to try to find a path to the standing lady after warning her to shut it up or she was coming after her. Someone brought the security before anything happened. During the intermission the seated lady said that the standing lady didn't understand how unusual this experience was and that she was ruining it for everyone. I felt like the only one she ruined it for was the seated lady. I told her, "Your are right. This is a unique experience and that is why you should enjoy it yourself and just ignore that lady." Even from the grave Merle still has the ladies fighting over him.

It does not matter what our stories are or what our beliefs are music has always been something people connect on. The people clapped harder for some performers than I did, while at times I didn't feel some were given their due but it didn't matter. I still felt like we were all on the same page. We were connected by Merle and what his music has meant in our lives and what it will continue to mean to others in the future. This concert was exactly a year after his death and also celebrated his birthday. Even after a year of being gone Merle Haggard still packed the house.

I also thought about Nashville and how so many talented people are drawn here as if magnetized by those that came before them. Randy Travis, George Strait and Garth Brooks and others like them heard the voice of Merle on their radios and said I want to do that too.